For homeowners, big projects and purchases may be another casualty of rampant inflation, new research suggests.

Overall, 60% of homeowners in a recent survey are less comfortable making large purchases for their home or household because of rising prices, according to Hippo Insurance’s 2022 Homeowner Preparedness Report. And nearly 43% either strongly (14.4%) or somewhat (28.4%) agree that inflation has caused them to delay planned home improvement or maintenance projects.

The poll used to generate the study was conducted April 29 to May 1 among 1,915 U.S. adults, by Ipsos on behalf of Hippo.

More from Personal Finance:
Cost to finance a new car hits a record $656 per month
How to get started building credit as a young adult
Here’s what the Fed’s interest rate hike means for you

With inflation up 8.6% year over year in May — more than expected and the fastest pace since 1981 — households are facing price increases in everything from groceries and gas to rent and clothes, according to the latest data from the U.S. Bureau of Labor Statistics. Generally speaking, demand continues to outstrip supply, which is hampered in many cases by supply-chain issues.

Residential housing construction costs are up 19% from a year ago, according to the National Association of Home Builders. This can translate into higher costs for home improvement projects, depending on the specifics. The housing market appears to be cooling amid higher interest rates and skyrocketing home prices, however; the median list price of a home in the U.S. is $447,000, up 17.6% from a year ago, according to Realtor.com.

‘Not all home repairs are created equal’

However, delaying some projects can be risky. Putting off routine maintenance can lead to bigger repair outlays down the road. Last year, homeowners spent an average of about $4,000 on home repairs, the Hippo survey showed.

While it’s wise to have money set aside for maintenance and repairs, you can also take steps that may help avoid costly fixes. For instance, be sure to know where the main shutoff is for water. If you discover a leaking line from your refrigerator or washing machine, turning off that valve can prevent worse water damage.

“Start with a routine inspection of your home,” said Courtney Klosterman, consumer trends expert at Hippo. “Take note of any visible imperfections, such as cracks in the foundation or damp areas, which could be an early sign of mold.”

From there, Klosterman said, create a list of must-dos and nice-to-dos, so you can work through your list over time.

“Prioritize issues that are known to be costlier to repair such as water leaks and any structural issues around the house,” she said. “Not all home repairs are created equal, so it’s important to look for signs that a project needs to be addressed quickly.”

For example, malfunctioning critical systems, such as a broken-down water heater or an electrical short should be prioritized, Klosterman said. That’s also when licensed professionals should be called on to fix the problem.

If you’re unsure where to start when it comes to key home maintenance, you can find checklists online, including at sites such as Hippo or Homeadvisor.com.

Correction: This story has been updated to reflect the accurate percentages of survey respondents who either strongly or somewhat agree that inflation has caused them to delay planned home improvements.

Sun Jun 19 , 2022
Raymond Valois has owned and operated Valois Home Improvements since 2000. (Photo/submitted) SHREWSBURY – Strike up a conversation with Raymond Valois (pronounced “val-wah”), and you will quickly understand why he is respected by his customers. Valois sets the bar high for himself in his work as a craftsman of home […] 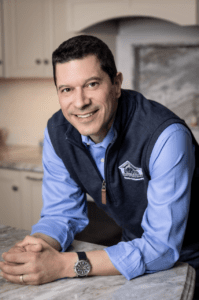